In 1864, Eli Allen built a “one-story frame house (24′ X 27′) with a board floor and cellar under the house.” This cellar appears to still exist under the east side of the present house, today known as the Yak and Yeti Brewpub, a basement 24′ X 27′. Eli Allen was the second postmaster of Arvada, having taken over from Benjamin Wadsworth in 1882. He operated that Post Office from his home until 1889, when the structure was described as “a lovely home” at the location of present day Ralston Road and Yarrow Street. The Allen family also maintained race horses in a large stable on the property, and were instrumental in the development of the Highline Canal, giving them water to irrigate their crops as early as1863. 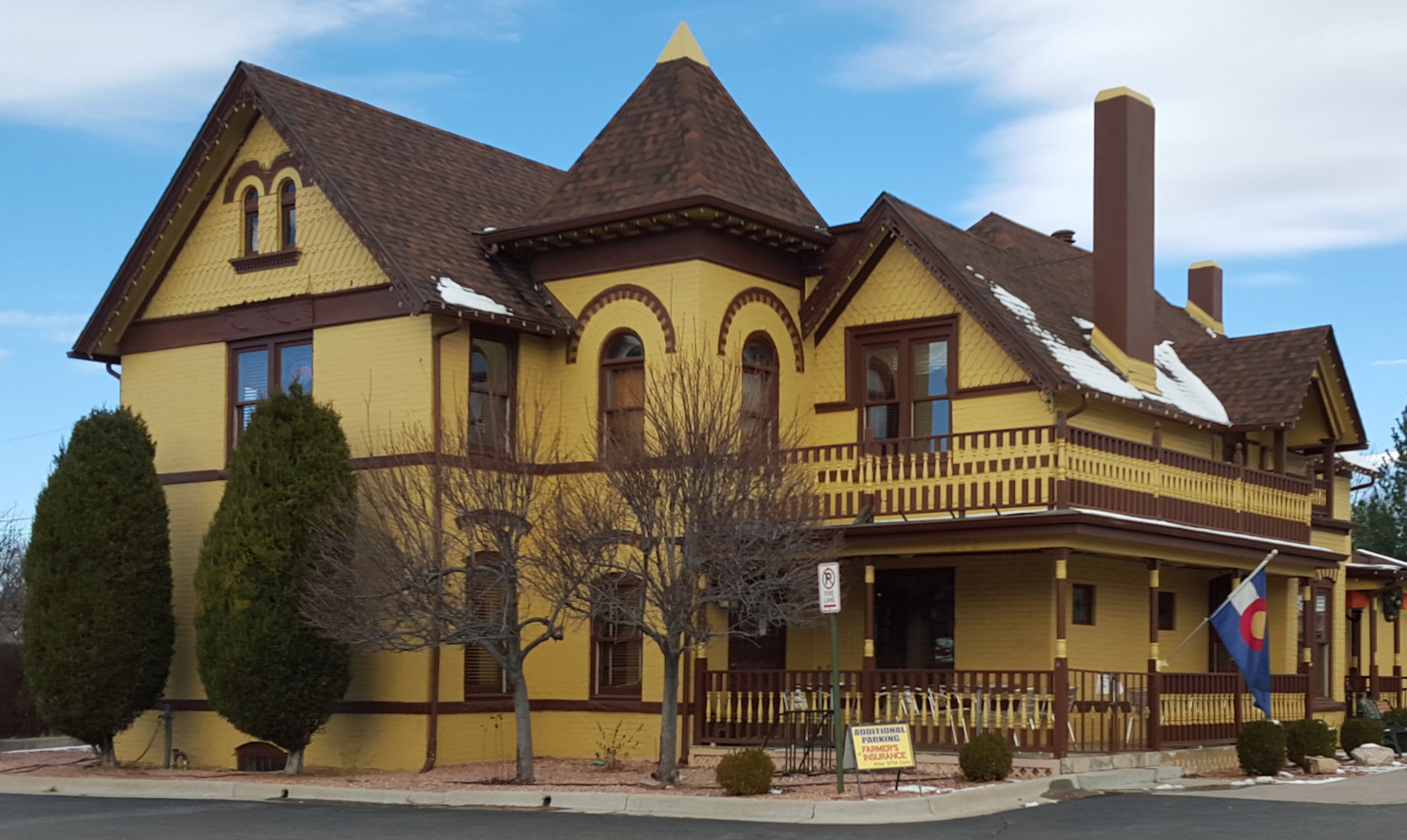 Eli’s son, C. Irwin Allen, took over the property in 1891 and, in preparation for his upcoming marriage, upgraded the existing house, or perhaps built an entirely new two-story, brick structure on its site. Irwin passed away unexpectedly at the age of 28, leaving the unfinished house and property to his new bride, Jennie. Photographs of the house from period show the distinctive fish-scale shingles, windows, roof-pitch and carved barge boards still visible today.

In 1894, the independently wealthy Elias W. VanVoorhis came to Colorado for health reasons. While on a buggy ride along Ralston Road, he and his young bride Cora spotted the house, and later bought it from the widow Allen. They completed the construction, and hired a Denver architect to design an addition to the west side of the house, which was completed in 1895. The two sides were joined at the tower, creating the basic look of the house today.

Cora and Elias had twin daughters, but only Elizabeth, called Betty, survived. Betty married Milton “Nic” Nicholson, part of a well-known family of masons and builders, who were involved in the construction of several of Arvada’s churches. Cora VanVoorhis’s sister, mother and uncle Ned lived with the family in this house, and Uncle Ned used to take refuge from all the women, reading in what is now known as the tower room, which he called the “Sanctuary.” Ned, Cora’s mother, sister, and husband Elias eventually passed away, leaving Cora living in the big house with Betty and Nic, and their daughter and son. In 1929, a fire was started by baby mice playing with wooden matches (so said the Arvada Fire Marshall), which caused extensive damage on the east side, including the destruction of the balconies. Cora saved the sleeping children by wrapping them in wet sheets and carrying them downstairs through the smoke.

Nic and Betty used to celebrate their birthdays together each year (Nic’s was September 1, Betty’s was September 2), with an all-night party, beginning with a stuffed pork chop dinner in the upstairs dining room, then off for dancing until midnight at the Trocadero Ballroom in Elitch Gardens, and back to the house for date cake. Bridge parties were also common in this room, and Betty’s orange embroidery is still visible on the wall. Cora died in the 1940’s, from injuries suffered in a fall down the stairs. Nic and Betty’s daughter Katie (Katherine) reported visits from Cora’s ghost after the funeral, and stories tell that Uncle Ned is also still roaming the halls, but both are said to be friendly.
After the death of her mother, Betty divorced Nic, cut down the trees and modernized the house. She subdivided the 33 acre homestead and sold the lots, then turned the big house into apartments. She expanded the quarters by dragging the old chicken coop across the yard and attaching it to the rear of the house, where it today houses the kitchen and restrooms. Katie lived in an apartment in the old barn when she graduated from college.

Over the years, the house became run-down, and increasingly in need of major repairs, but since the money wasn’t available, it was eventually gutted and made ready for demolition. However, in 1997, a group of investor/contractors bought the property and spent three years of their own labor restoring it and converting it into a restaurant/brewpub. They kept the original room layout as much as possible.

Katie’s old bedroom is now board room, and her brother’s room is known as the “Owner’s Room” today. The original 1895 hardwood floors are preserved in many areas, and what is now the office room was once Cora’s washroom and summer kitchen, where she put up her famous canned peaches.